Fulshaw WI
CHARITY SUPPORT 2022
Community Events Saturday 25 June - Gardens Day - Wilmslow Wells for Africa – raised £19,291 Several members were seen enjoying the day, there are some amazing gardens in our local area. Sunday 25 September - Wilmslow Festival of Nature This September everyone is invited to take part in a month of free activities across Wilmslow, designed to inspire and motivate us to take more care of our planet! On Sunday 25th September there will be a Car Free Street Festival outside the Rex (the road will be closed for the event) and there will be a pedal powered concert hosted by BBC DJ Chris Hawkins, children’s activities, carnival performers and much more (See festivalofnature.co.uk for full details). The Cheshire WI Climate Ambassadors are having a stall at this event called ‘Make Smaller Footprints’ where we focus on how to save energy, money and reduce our carbon footprints all around the house & garden. We will also put on fun children’s activities e.g. making an earth mobile and bee hotels. We would love to see WI members and their families at the stall and maybe join in as part of Fulshaw WI’s contribution to the Climate Coalitions ‘Great Big Green Week’ which runs from 25th September to 2nd October. Recycling items We will pass on the following items to be reused by charities. Bring them to a meeting. Foil crisp bags (washed and split open) Postage stamps (with a 4mm border) Blister packs (must be empty) can be taken to the Northwest Air Ambulance Charity on Dean Row Road.
Charity News Donations for The Toy Appeal 2022 Fulshaw has collected and volunteered for The Toy Appeal https://thetoyappeal.com/ for a number of years. This year the target will be to provide an incredible 10,000 Christmas toy sacks for children across the region who are referred by charities, social workers, teachers etc. Children receiving a sack range from babies to 18 years. The sacks consist of a main present, a stocking filler, board game or puzzle, books, arts & crafts item, a teddy and a ball/sports item. If you or your families are looking to declutter soft toys (teddy's) or reading books, which must be ‘as new’ condition, please bring to future meetings. 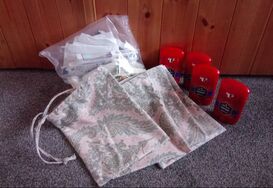 ​JUST A FEW OF THE MANY SMALL BAGS AND TOILETRIES WHICH FULSHAW MEMBERS HAVE SEWN, BOUGHT OR COLLECTED FOR BARE ESSENTIALS.

having completed their  efforts of sewing scrubs and face masks for the NHS and care homes, Many members turned their attention to knitting christmas puddings which fit over a tunnocks tea-cake. It is  hoped that  these can be sold in aid of the local hospice if lockdown restrictions enable it to happen
​ 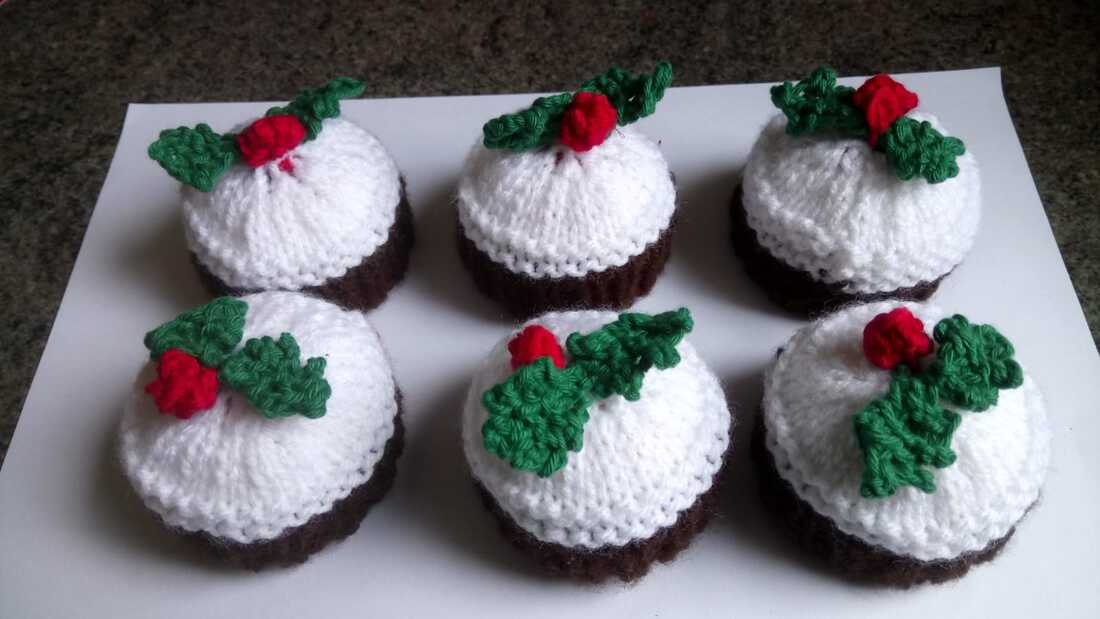 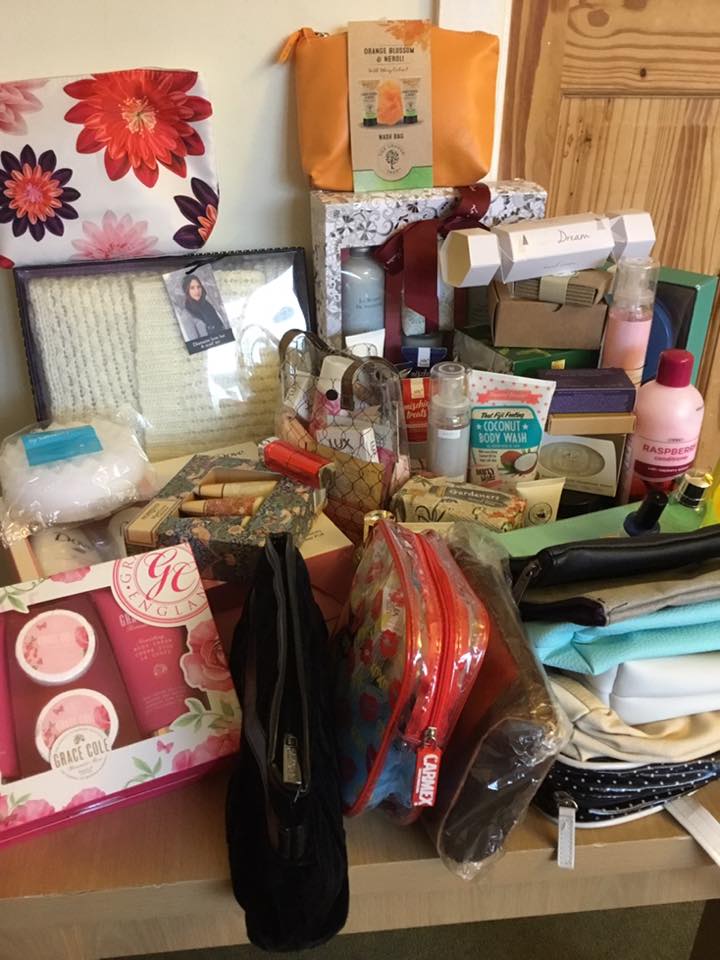 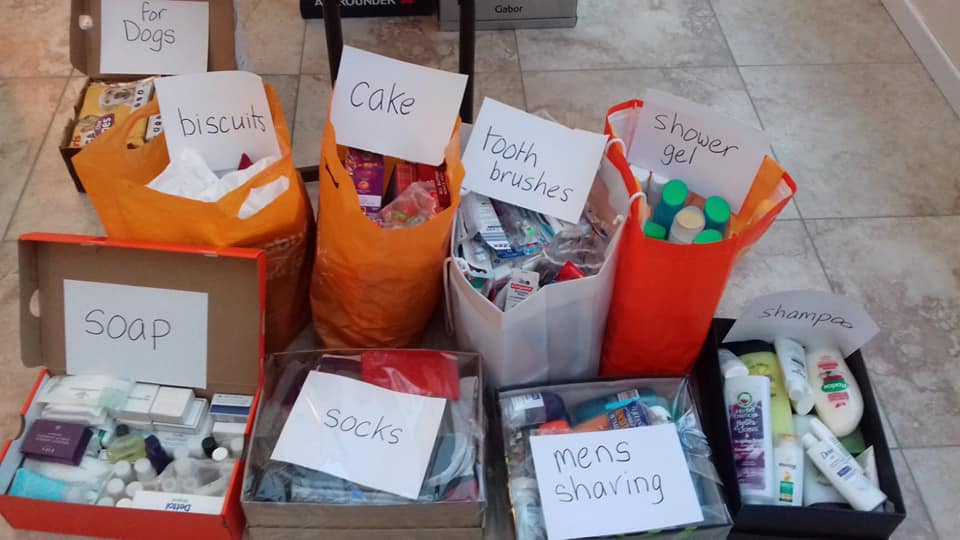 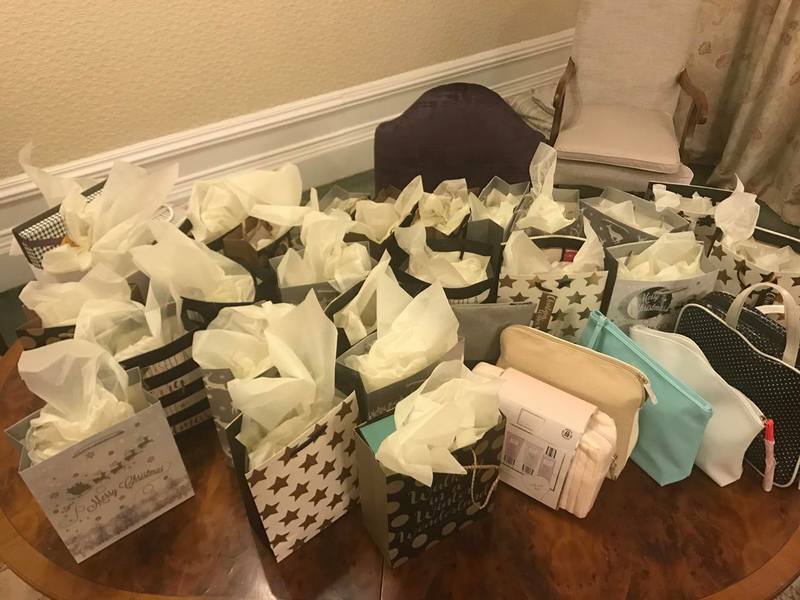 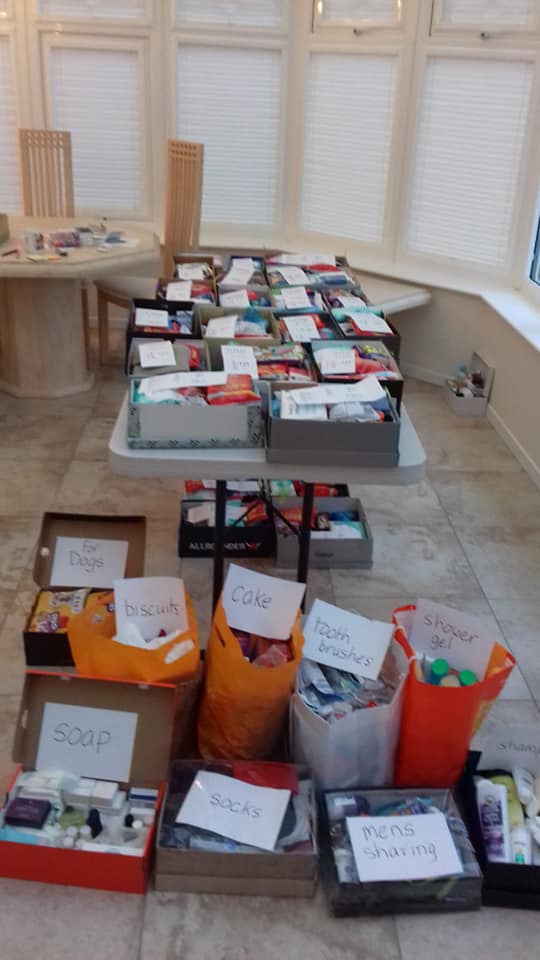 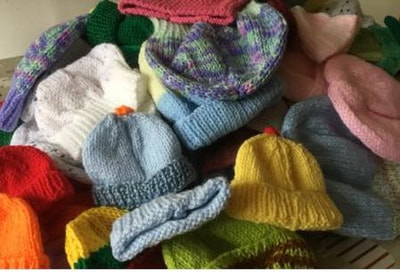 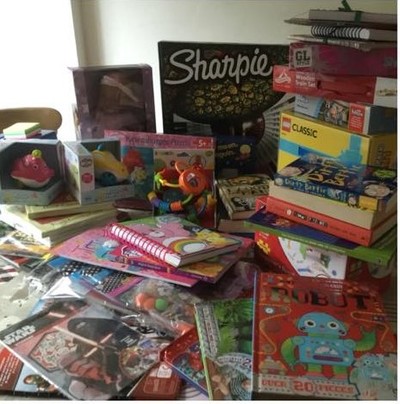 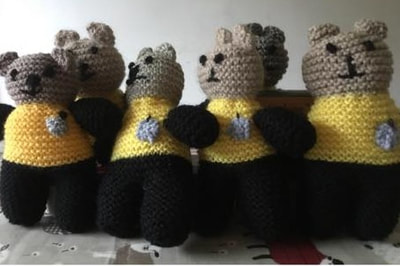 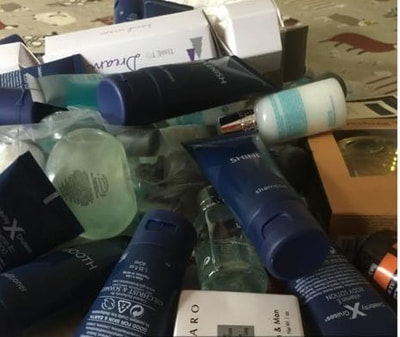 We are delighted to report that another six large bags of bottle tops were collected at the May and June meetings for the Air Ambulance. This is truly remarkable and very much appreciated by everyone concerned. Please carry on collecting!!

KNITTED BABY HATS FOR STEPPING HILL
A staggering 74 hats were brought to the April meeting and a further 91 to the May meeting that our ever industrious ladies had been busy knitting. They have all be donated to the Maternity Department at Stepping Hill Hospital who we know are extremely grateful. 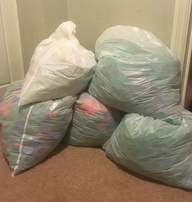 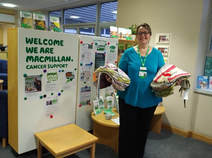 BREAST DRAIN BAGS
At the end of January 2018, the first delivery of Drain Bags was made to Macclesfield Hospital. They were very appreciative of our efforts and explained the importance of providing a new bag to every patient. Thanks to Dee for coordinating this worthwhile project. 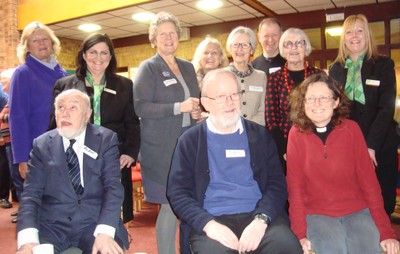 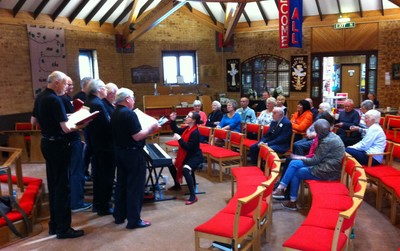 The Delicious Cakes on Sale
WILMSLOW WELLS FOR AFRICA SOUPERDAY - MARCH 2017
Another successful 'Souperday' took place on Saturday 4th March 2017 which raised over £1,300 for the Wilmslow Wells for Africa Appeal. Fulshaw ladies contributed towards raising this fantastic sum by donating a huge number of home baked cakes which were sold on the day by 3rd Wilmslow Brownies. The standard and quantity of cakes donated was overwhelming and everyone's generosity was very much appreciated by the organisers. 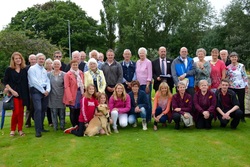 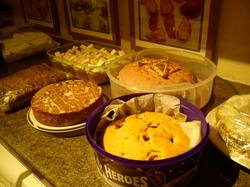 Just a Few of the Cakes Generously Donated
WILMSLOW WELLS FOR AFRICA - SOUPERDAY
Fulshaw WI were asked to bake cakes for the Wilmslow Wells For Africa Souperday held on Saturday 12th March 2016. As usual, the ladies of Fulshaw WI surpassed themselves both with their generosity and their talent. 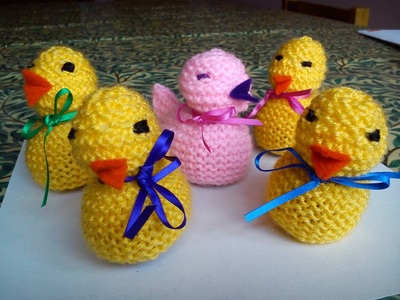 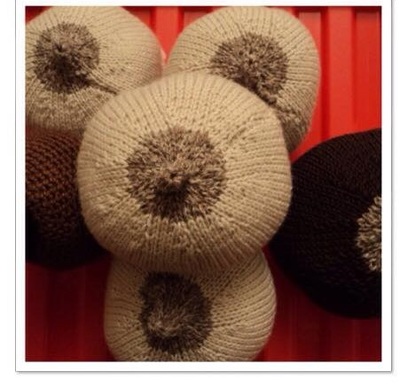 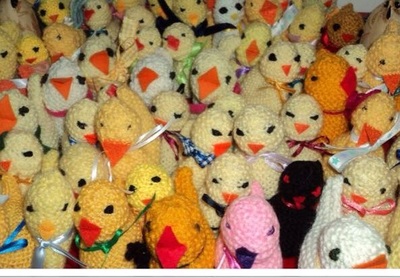 Many of our members have been busy knitting recently as we were asked by Francis House to knit Easter Chicks to fit over crème eggs for their Easter Fundraiser. We were also asked to either knit or crochet breasts to be taken out to South Africa to help teach about breast awareness and feeding. Thanks to everyone that made the effort and brought their finished items to the February 2016 meeting. The photos show what a great response we had.

MAKING 100 MORSBAGS
On Saturday 3rd October 2015, we will be organising a workshop at ﻿St. Anne's ﻿to help in the production of 100 Morsbags which will be given away to encourage recycling before the introduction of the charges for plastic bags in England.
This is just one of the initiatives we have chosen to commemorate our 100th Anniversary.

COLLECTION OF SANITARY PRODUCTS
We are delighted to report that 102 items of Sanitary products were collected at the September meeting. These will be donated to homeless and women in crisis in the Manchester Area and will be donated to Coffee 4 Craig, the Pankhurst Centre and Life Share. Thanks to everyone for their generosity.

CENTENARY GARDEN  - 120 SPRING BULBS NOW PLANTED!
Why not have a stroll to look at our Centenary Garden, officially opened on September 16th 2015 to mark our 100th Anniversary!  It now has a selection of pollinator friendly perennials, four fruit bushes and a family apple tree and a commemorative plaque. This is situated at the corner of Arlington Way and Moor Lane and we are working with Incredible Edible Wilmslow to maintain this permanent bed which will also incorporate a Centennial rose bush later in the year.
There will be lots of opportunities in the future to get your gardening gloves on and give a hand. Please let Jennie Palin know when you are intending to do something so that she can show you where the bulbs are already planted and co-ordinate weeding and tidying.
The creation of this Garden has helped Wilmslow in Bloom to retain it's Gold Award status and a discretionary award of "Best Community Effort" this year.

WILMSLOW WELLS FOR AFRICA
Wilmslow Wells for Africa is a charity that works to provide wells, pumps, dams and water collection equipment in drought-stricken areas of Africa.
They held a Souperday on Saturday 14th March, at Wilmslow Methodist Church and raised £1,500 for this cause. Home made soups and bread were sold for lunch plus there were stalls selling Cakes, Home Produce and Good-as-New. We were delighted that 11 of our members donated home made cakes to be sold on the day which helped towards raising such an impressive amount of money.

FOOD BANK DONATIONS
Members were asked to bring donations of non-perishable food items to the March 2015 meeting and a huge quantity of items were generously given.

BRA BANK
We are currently collecting unwanted bras to send to Africa. The ownership of a bra is a great status symbol in some parts of Africa and many women simply can't afford to buy one. All bras collected are sent to 'Against Breast Cancer' and BCR Global Textiles are donating £1,000 to research funds for every tonne or 9,000 bras collected.
We will be continuing our collection for the next few months so please remember to bring along your unwanted bras to the monthly meeting and pop it in the Bra Bank.
We have collected almost 400 bras so far, so please keep collecting!!